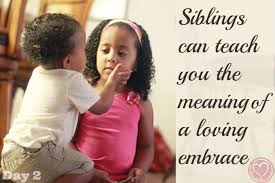 How having brothers influenced my life – Juggling Life One Child as A Time: I never had someone I wanted to be like when I was growing up. I never really emulated anyone famous or thought about being someone different.  Of course, like most children, I had favorite sports figures and action heroes.  I loved Don Mattingly, the best Yankees first baseman to ever play the game, I wanted a mustache just like him, and my favorite action heroes were real US Soldiers.  I never joined the military mostly because I hated being told what to do. And I’m not going to lie, getting killed (even for a very noble and worthy cause) kinda scared me off a bit, as well.  I grew up during the Desert Storm campaign and watching it on TV helped me get a feel for how difficult the world is outside of a civilian life.  Those of you who served, or have had family that did or does, know this first hand. I guess the more I think about it I never wanted to be anyone. Hell, there were times I didn’t even want to be me.  Don’t worry, I am not going to make everyone uncomfortable and turn this into a pity party. That is not what this is about, so please keep reading.  But let’s be honest, there have been times in all of  our lives when we felt we were getting the worst of it: the worst parents, the worst teachers, the worst boss, the worst jobs, the worst bullies, just the worst.  Now, when we look back on it, we realize it really wasn’t as bad as we made it out to be. Those events shaped our life and helped make us stronger.   Eventually, the events pass but the feelings still leave a mark on our souls.  The one thing that made it easier for me was having  brothers. 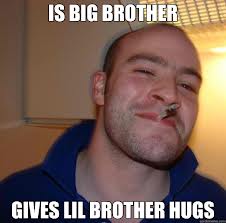 I grew up with three amazing brothers, Raphael, Michelangelo and Donatello (obviously not their real names).  We all differ yet share many similarities. People who grew up with us would say that we all have the same smile.  With each brother came its own unique relationship.  As the oldest, I feel a different connection to them. Definitely different than what they think they know.  Growing up my parents worked.  In doing so my parents left a lot of the responsibility to me to “take care of” my brothers after school and on the rare occasion they went out to enjoy each others company.  I use the phrase “take care of” loosely because in order to be successful in this feat I had to prevent trips to the hospital and the house burning down. There were plenty of fights, broken doors and holes in walls.  Being responsible for anything that went awry forced me to make better decisions when I was with my brothers. We still had fun but probably not as much as we could.  Even today, with my brothers all grown up as successful working adults, I still have that feeling of responsibility. Most of the time it’s unwanted advice, but I still try to help.  What’s nice is now I can get some good advice, also.  Being able to see different perspectives on certain situations has allowed me to understand that we all experience the same things even if it’s in a different light.

Just like with a family, playing favorites with brothers or sisters is frowned upon. This is probably a good thing. Not 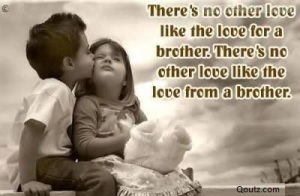 one brother is more important to me than the other, just like any one of my children would be (I only have one at the moment but you get the point).  It is fair to say that you can have more in common with one sibling than another simply due to interests you share or experiences that you have gone through.  Let’s not confuse being similar to somebody with having things in common with them. Sometimes, being similar may actually mean you have much less in common.  In my case I have more in common with my younger brother. Lets call call him Leonardo for privacy reasons. Yet we are the least similar.

Leonardo and I are 18 months apart and couldn’t be more different.  I thrived at playing sports, he thrived at cutting down trees and getting into trouble.  I followed a more “mainstream” form of education he chose a more “practical and hands-on” approach and eventually entered into law enforcement.  I was more calculated in my choices, he was more live by the seat of your pants.  With all these differences we are still very similar.  We grew up as best friends: we caused trouble together, we backed each other, we drank together and when we needed to be consoled the other was right there. In my opinion, one of the main reasons we have so much in common was that we were all that eachother had until my parents started having the “second crop”.

In our 20’s we drifted apart. I would imagine this happens to most siblings as they get older. His path took him across the world to many exotic and dangerous places.  His thirst for an adrenaline rush placed him into a career which brought him to different continents, far away from his family. This is what he wanted. I’m sure he would tell you he’s happy he made that choice. Then things changed. My little brother got married and had a daughter. Looking back, it was probably the best thing that could have happened to him. Given his line of work, he was often away from home, leaving his wife and daughter. Fortunately for him and for me, I lived close by and was able to help. Being with my niece showed me something I had never experienced before. I began to see what it was like to have another person who needed you and who you loved unconditionally.  I became very close with her. When my brother finally came back it was hard to let her go. I knew it was necessary so she could develop the important father-daughter relationship. I was also able to understand and appreciate how important it is for our kids to have somebody other than their parents who are there for them. I again saw the importance of having my brothers in my life. No matter what happens they will always be there for me. It was after my brother had his daughter that he realized how important it actually was for his daughter to have a sibling, just as we had each other growing up.

Being around my brother and his family taught me that I was ready.  I was ready to start a family and to take all the love that I had for my niece and give it to a child of my own.  Having a child would have been impossible had I not shared this important bond with my niece and nephew. I am lucky to have found out first hand what it was like to love a child like it was my own.  Now that I have a daughter, I feel it is my responsibility to Alana to give her that “plus one” and make sure that she always has someone who will be there for her.

Good times or bad times, my brothers have influenced who I am today as a parent and person.  I believe if it was not for them I wouldn’t be the empathetic, nurturing, or “parental” man I am today.  I watch my brother with his kids, while we have different philosophies on parenting, we both talk to each other and give advice when it’s needed.  Recently, my other younger brother, Raphael, (not really his name either), found out that he is going to be a dad as well.  I think that if there were two book ends, he and I would be them.  Even though I am the oldest and he is the youngest, we are the most similar.  If that is any indication of how he will be as a parent, I know he will love his child unconditionally and do everything in his power to be there.  I wish him and his wife all the best as they start this wonderfully difficult and rewarding journey as parents. I know that all my brothers no matter where they are or what they do with their lives will share with me the special bonds of brotherhood.  Weather or not my brother Donatello has children is yet to be seen, but whatever his choice I know that his paternal instincts will take over and he will be as great a parent as he is a brother.